A case of organised crime

In my text "The enemy within - Counter-intelligence use by non-state actors" from March 2013 (http://www.janes.com/article/22707/the-enemy-within-counter-intelligence-use-by-non-state-actors) I mentioned - beside others - the international influence and diffusion of South American drug cartels and Outlaw Motorcycle Gangs like the Hells Angels or Bandidos. I showed the highly critical approach of their members, getting

a) military expertise and
b) connecting with international criminal chapters and networks during their military duty abroad.

Related to this it was interesting for me to read this article:"Marines implicated in massive Camp Pendleton area organized crime ring. NCIS investigated 64 individuals, confiscated $1 million worth of contraband" (http://www.military1.com/marines/article/403028-marines-implicated-in-massive-camp-pendleton-area-organized-crime-ring). 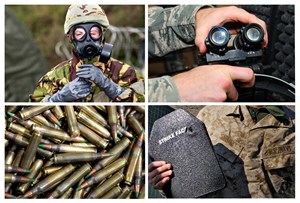 (The Naval Criminal Investigative Service investigated 64 individuals including active-duty and former Marines and sailors, and confiscated one million dollars worth of contraband in connection with an organized crime ring in the Marine Corps Base Camp Pendleton, Calif., area as part of Operation “Perfect Storm” June 4. Among the items confiscated were enhanced small arms protective insert plates, tactical vests, M-40 gas masks, 10,000 rounds of 5.56 millimeter ammunition and night vision goggles, in addition to drugs and other contraband. (USMC/Sgt. Tyler Main)
(Picture and citation: www.military1.com, 27.07.2013)

"It is well known in the service the Mexican Cartel has guys in the Corps getting trained and getting access to these sorts of things. I personally served with a PO2 (a Mexican national with no intention of getting citizenship) who admitted to joining simply to get the GI bill and go back to Mexico and marry his fiance. When he told me about the cartel guys who join for obvious reasons I almost lost it. My cousin in the Army told me of a guy stabbing another guy while he slept when he found out he was an X13, so he stabbed him because he was X14 (those are gang affiliations here in CA for those not in the know..."

I could imagine that we have to deal with this development in the near future with more sophisticated intelligence. Just take a look at the lists of people with a criminal background/membership in a criminal organisation AND a Security Clearance. Take those numbers and connect them with the millions of people in the US, which got their SC, doing sensible work for the government - and you will know what I mean.
Eingestellt von Stephan Blancke um 05:46 Keine Kommentare: