Game of Pawns - again and again

One of the last cases in espionage conducted by Chinese intelligence shows again a few interesting details. As far as I understand the arrested person is not finally convicted and so I will not give his or her name away. Anyway: The person I am talking about is one of the latest in a long line of former US intelligence officers, many of them working now as a private contractor, accused to be a spy for China.

Regarding the documents related to this case the person worked – beside other functions – here (I did all the blackening because I don’t think that every detail should be posted online):

The interesting detail is about the commercialisation of promoting „friendship“ between China and the US. There are similar business models in Germany as well and it is necessary to investigate them – due to their harmless appearance and their honorable goal they represent a great challenge for counterintelligence. They can rely on a mass of mostly local politicians and business folks which are so naive to think they are NOT cooperating with the Chinese government. Any criticism of this “friendship” promotion is often condemned as racism, neo-colonalism etc. by the (in Australia so-called) “panda-huggers”. It is no wonder that Confucius Institutes can be opened in Germany, whereas in other countries some of them are closed again for good reasons. Not every Friendship Institute is a nest of spies, but given the massive expansion of Chinese efforts, caution is needed.

The documents related to the mentioned case show further details which could be the basis for an extensive analysis of the current Chinese way of operation, their front companies, way of payment and of communication etc.

Some remarks of the FBI Special Agent in charge reminds me on the great danger of leaked or stolen documents when it come to the sources on the ground:

A not too extensive research in the open web and not digging into the mass of Snowden files gave me a trove of NOFORN documents which are obviously not for the public. One example (and again I did the blackening): 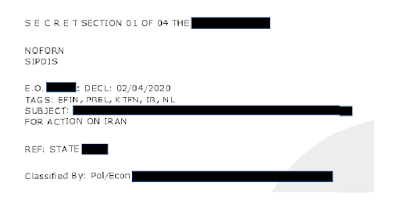 In this document I can read relevant details as:

The Chinese intelligence agents have a good chance to find interesting details online – just in case they will not find a greedy foreigner, willing to sell national security assets. For all the future traitors I recommend a short movie, which is about this Game of Pawns.