The practical thing is that in many cases mob and political power are near to each other – literally: Sometimes they live next door. This can be confusing for both. And for the media.

It is not so new but I still cannot believe it how ignorant parts of the media reported this nearly forgotten tweet from POTUS:

Is this really McCarthyism? Or is it fighting organised crime? Take a deeper look at the brave work of the United States District Court/Southern District Of New York and their investigations about the Taiwanchik-Trincher Organisation, obviously part of the Russian Organised Crime scene. Regarding the indictment this organisation "was a criminal organization whose members and associates engaged in crimes including operating an illegal gambling business, money laundering, and extortion."

Beside others the Feds looked at this nice flat: 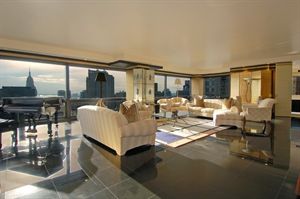 The adress can be found in the indictment:

Yes, it is the Trump Tower. Nice coincidence. A current look into a real estate database shows this:

Another chart appoints to the Russian family - and to POTUS:

Elena Trincher - she does not appear in the indictment - is also mentioned in the Russian internet:

Trump, the Russians, the mob...it can be a confusing thing to find a clue in this opaque net. Already in the near past, in 1999, the one who may be to near to POTUS, was bugged: Putin. He met Berezovskiy a few times in Spain, in Sotogrande - the place where Berezovskiy and Abramovich 1996 hugged each other tenderly (seen on a photography). In this interesting city Spain intelligence observed a Russian Organised Crime figure - who lived next door to Berezovskiy.

And all the distrust about meetings between Russians and US officials...this has tradition and nothing is new: During his presidential campaign Al Gore had the problem that he was the former contact for the relations between Moscow and the White House - under Clinton. Others as Strobe Talbott were acused to be - more or less - unofficial sources of intelligence for the Kremlin, claimed by... the Russian intelligence, here the former agent Sergei Tretyakov.

"Information at best will always be in some part fragmentary, obsolete, and ambiguous."(Armstrong, Willis C. (et al.): The Hazards of Single-Outcome Forecasting, in: Westerfield Bradford, H. (Ed.), Inside CIA's private world, Yale 1995, p. 242).