...were sometimes seen in the past, when their intelligence agency MOIS tracked down dissidents. The last incident showed their still ongoing efforts, including sleeper cell agents and one diplomat from the Iranian embassy in Vienna. This diplomat was charged by German authorities with planning an assault against a meeting of the exile group National Council of Resistance of Iran. The Federal Prosecutor General was a little bit shy and named the suspect Assadollah A. But a simple check of the Vienna embassy staff shows more details. 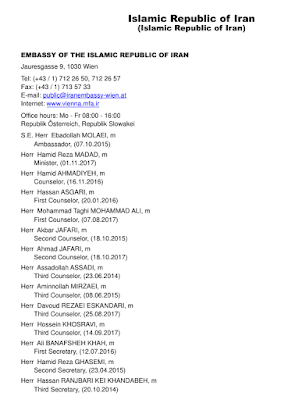 Using an explosive device for political reasons is a strong signal, but it is one instrument of influencing the political situation in a country.

Accidentally I published a new paper today which looks into covert and clandestine operations of some states, which are extremely active in countries as Germany - often supposed by officials who are on their payroll or just think this is the right way to do politics. These operations can be aggressive and violent, but also totally unremarkable.

If anybody is interested: I have the honour to inaugurate the new Research Paper Series of the European Intelligence Academy with my paper "Influencing the Adversary: From Wet Affairs to Propaganda".

...was a public diplomacy publication of the Defense Intelligence Agency (DIA), which provided an estimate of the military strategy and capabilities of the Soviet Union during the final years of the Cold War, ostensibly to alert the U.S. public to the significant military capabilities of the Soviet Armed Forces. The single publications were not classified and can be downloaded easily.

A few days ago I found three of them in a box, hidden in an dusty bookstore in Dublin. Inside were a few old articles from newspapers of the 80s and one - Volume 1987 - was stamped presumably by the US Embassy in Dublin.

More interesting is a document, made with a good old typewriter, which I found inside. It seems to be - more or less - a compilation, written 1987 by the Unites States Information Service (USIS), the former name of the today's United States Information Agency.

Nothing Top Secret, but anyway its a nice historical piece. Due to the dusty place I found it I decided to publish from time to time some scans and documents from my archive on my new, simple site namend Dusty Insights. The document can be downloaded there.
Eingestellt von Stephan Blancke um 12:33 Keine Kommentare: