Business as usual: In Hong Kong, democracy is actually at its end and meanwhile one has to seriously ask oneself to what extent the arrests, the sudden disappearance and the exodus of non-communists will reach. The BBC quite rightly asks: Can Hong Kong's democracy movement survive the walkout?

Others are more relaxed about everything and pursue their commercial interests. If we can believe the Chinese state press - in this case "China Report" No. 90, November 2020, p. 7 - Deutsche Telekom and the Chinese company OPPO become business partners in matters of 5G. With Huawei, it wasn't so nice to do business recently, so you can now look for alternatives. And OPPO is obviously a good choice. The various warnings and notes, for example about allegedly installed spying malware, the transfer of user data through Facebook to this Chinese, allegedly private company and a few other "completely harmless" comments: Forget it, it's not good for business. A critical tone is not appreciated in these circles.

It is also astonishing how uncritically other contemporaries work completely openly for Beijing's foreign policy. There is, for example, an institution called the South China Sea Strategic Situation Probing Initiative (SCSPI), which claims to be founded in April 2019. Everything, really everything that can be read there is direct propaganda, US bashing in every sentence and an omnipresent justification for a continuously deteriorating situation that international jurisprudence declared illegal as early as 2016 - which China does not care about.

Science and research are a good thing and should be free and independent. Propaganda is not one of them. So I'm interested: What is the reward for spreading theses and claims that are decorated with a few graphics? What is it worth to foil a current status that is not only illegal, but also erodes the stability of a sensitive region? Here are some excerpts from texts that deal with alleged western provocations (= freedom of navigation) - written by non-Chinese:

„In the longer term, if the U.S. wants to avoid direct conflict with China in the South China Sea -- or at least postpone it-- it must accommodate or at least appear to accommodate to some degree China’s international interests and aspirations there— On what issues, when, how, and how much are questions to ponder and negotiate.“

„Regardless of any legal technicality, the US should avoid such behaviour, which has no good strategic purpose and is contrary to the basic principles of crisis prevention and management.“

„Despite being friendly to China under the leadership of President Rodrigo Duterte, the Philippines expressed deep concerns over the China-Vietnam incident and stressed that such incidents could undermine trust building in the region now seriously suffering from the pandemic.“

There are now a lot of people and organizations that are known to lobby for Chinese politics. This is legal as far as it does not downplay illegal conditions. Last but not least, I compiled here the staff behind SCSPI and its texts: 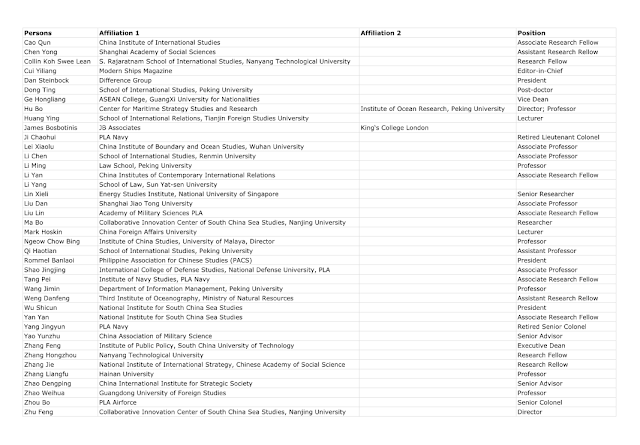