A favourable wind had driven me to beautiful Bolougne-sur-mer at the Channel. By accident there I discovered one of the many offshoots of the Ukraine war: a Russian vessel detained by the French government back in February 2022. 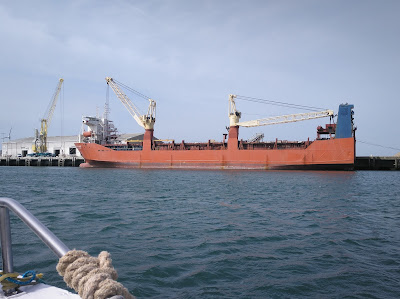 The MV Baltic Leader is owned by the Russian TransMorFlot LLC, which manages more than 30 vessels.

On approaching there was no activity on board to be seen. Maybe the Russians were working inside, busy with launching a mini sub or small submersible ROV (Remote Operated Vehicles)... 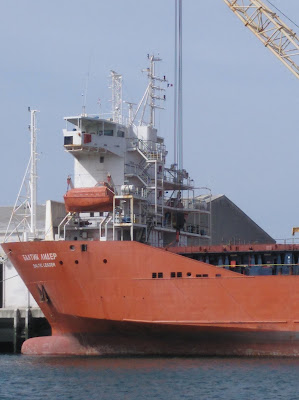 A captain I got talking to told me that the Russians were not allowed to disembark - though I wonder if that is actually the case.
Eingestellt von Stephan Blancke um 10:56 Keine Kommentare:

Founded in 1952 in Hamburg, the Atlantik-Brücke organisation is considered one of the most influential networks in Germany and has had its office in Berlin for many years. Its stated goal is a traditional US-focused policy. It is a member of the New Traditions Network (NTN). From the NTN's spartan website it can be seen that it has its official headquarter in the US Embassy in Berlin and is administered from there.
The Atlantik-Brücke can significantly raise now its profile due to the current crisis with Russia: From 1 June 2022, Julia Friedlander will become the new executive director in Berlin. In 2020, she had voiced clear criticism of the Russian government as co-author of the report „Defending the United States against Russian dark money“. But she had already consistently positioned herself against Russia during her 2015 to 2017 work at the Office of Terrorist Financing and Financial Crimes and 2017 to 2020 at the White House National Security Council. In 2017, she was at the G20 summit in Hamburg with, among others, Jared Kushner and McMaster, the then US National Security Advisor.

Some of the German members of Atlantik-Brücke - including well-known journalists - ultimately sued unsuccessfully in 2014 against claims in German media that they were quasi stooges of a NATO-friendly network. In view of increasing hostilities between NATO and Russia, it may be an advantage that Friedlander was an employee of the CIA from 2011 to 2015. Well, Atlantik-Brücke forgot to mention this on its website: "Julia Friedlander served as an advisor at the U.S. Treasury Department and the White House, among other positions." But Julia didn't:

Source: https://www.linkedin.com/in/julia-friedlander-022347b/ (last access: 19 April 2022)
Anyway, in view of the brazen Russian operations in Berlin, in Germany, in Europe, and also in view of the terrible war in Ukraine, it was probably a necessary step to send clear signals in these personnel decisions as well.
Other personnel from the Berlin office are also interesting. For example, I recognise a link to the German private security industry, among others to an ominous institute, which only had an address in Berlin, but neither email nor telephone. An alleged branch in Brussels, on the other hand, is completely unknown there. But: On this subject perhaps later.
Eingestellt von Stephan Blancke um 06:17 Keine Kommentare:

Options and risks for arms industry in Berlin

Since March 2022, the Predator drone manufacturer General Atomics Europe GmbH has a representative office in Berlin. The office manager, Frank Sitta, is to push lobbying work at the German seat of government. His chances should be good, because as a long-standing member of the liberal FDP and its deputy chairman until 2021, he has the best connections in the government. Sitta reports directly to Stefan Klein, Head of strategic business development at the companys headquarter in Dresden.
The reorientation of German security policy since the Russian attack on Ukraine opens up new options, especially for the defence companies represented in Berlin. Well-known companies include Ariane Group, General Dynamics European Land Systems, German Naval Yards Kiel GmbH, the Swiss RUAG, Saab and Thales. More unknown but highly specialised are CTC Medical, partner of the US company Tactial Medical Solutions, the IT service provider genua GmbH, which among other things develops secret communication technology, or a Gesellschaft für Systementwicklung und Informationsverarbeitung mbH. Among other things, it develops components for Diehl Defence's air defence system and classification tools that allow NATO and EU RESTRICTED. A niche has been found by the Berlin law firm Blomstein Part, whose clients include the defence industry.
Due to its active lobbying the Berlin-based, the powerful Bundesverband der Deutschen Sicherheits- und Verteidigungsindustrie (Federal Association of the German Security and Defence Industry - BDSV) has been targeted since a while by the left-wing extremist scene. 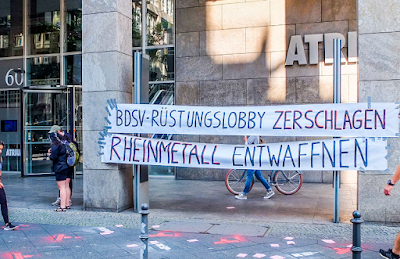 Source: https://de.indymedia.org/sites/default/files/2019/08/41529.jpg
After two relatively unsuccessful attacks, the Bremen aerospace company OHB was attacked again on New Year's Eve 2021: The arson attack caused millions in damage. Sabine von der Recke, CEO of OHB, has confirmed that customers include the German military, but not Frontex – as accused by the extremists.
In view of Germany's increasing involvement in the war in Ukraine as well as planned armament projects and increased financial expenditures for the military, it must be assumed that further attacks will take place, especially from the left-wing extremist spectrum.
Eingestellt von Stephan Blancke um 05:39 Keine Kommentare: